By Carolyn Stevens | Communication, Emotional Intelligence, Influencing Others, You As A Leader | 0 comment | 8 March, 2019 | 6

The greatest gift you can give anyone, both as a
leader 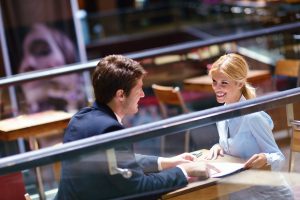 and as a person on the planet, is to be fully present when they’re talking to you.

Regardless of whether they’re telling you about the horrible drive they had this morning, describing how much work they have on their plate, or telling you about a problem they’re having with their peer
—being fully present, no matter what.

How To Do This

You’ll need to put aside whatever’s going on for you right now. When they’re talking, you’re simply there with them, 100%.

You’re not planning your response to their words. You’re not critiquing what they’re saying. You’re not going anyway else in your mind. You’re just there—now—just hearing them.

When compared to a typical conversation, which is so often about getting someone to see your point of view, being fully present is a real gift.

Later you can share your thinking. But for now, while they’re talking, just be there and hear them.

And that’s a real gift.

Will you count the number of times you’ve been 100% present today?

And increase that number by two tomorrow? And two more the next day?

It’s not just a little thing. It’s a big thing.

“Over the last 12-months I’ve developed my leadership skills beyond my
expectations. Carolyn brought out the best in me and helped me to identify
and reflect on the ways I could be a better leader. The energy, elegance and
experience of Carolyn’s coaching was paramount to my improved leadership
and has enabled me to progress my professional career. I look forward to
working with Carolyn again in the future and would be pleased to make a
recommendation to any of her potential clients.” —Leader, Consulting Group

Plus, as a personal career strategist, she specialises in helping ambitious female leaders create a reputation as an indispensable first-class leader.